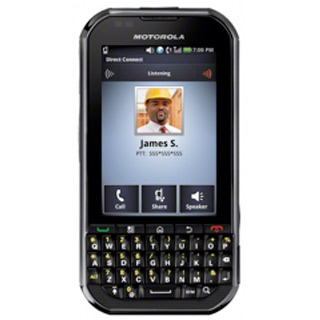 The new Motorola Titanium smartphone presented by Sprint is believed to be the first Android 2.1 smartphone to be launched in U.S.A. It touts to feature the best-in-class Nextel direct connect for push-to-talk and is the successor to the Motorola i1 which released last year.

This QWERTY smartphone is embedded with a 3.1-inch touchscreen display and equips an 1820mAh lithium-ion battery. It possesses features such as GPS navigation, stereo Bluetooth and Wi-Fi. Its 5MP auto-focus camera comes with 4x zoom, LED flash and supports recording.

The company says that their new smartphone is highly resistant to low pressure dust, shock, vibration, low temperature, solar radiation and high temperature. This is because it has been crafted with the military specification 810G design.

The device is equipped with a microSD slot, includes a 2GB memory card and supports up to 32GB of memory. It adheres to Nextel direct connect services which include Direct connect, Group connect, International direct connect, DirectSend, group messaging and NextMail.

The Motorola Titanium smartphone will be available from next week at all Sprint stores across USA and online at sprint.com. It can be purchased for a price of $149.99 along with a two-year service agreement after a $100 mail-in rebate.