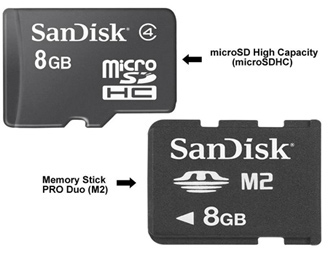 In California, an exclusive star-studded event also called “Wake up your phone” was organized by Sandisk to announce the release of its 8GB microSD High Capacity (microSDHC) and Memory Stick PRO Duo (M2) flash cards. The major event was held to promote publicity for Sandisk’s “Wake Up Your Phone” campaign that was directed to help people understand to get the best out of their mobile phones with the use of memory cards.

The 8GB flash cards are well-matched with the new generation mobile phones with card slots. The 8GB SanDisk microSDHC and M2 cards are ideal for the growing number of consumers using mobile phones as the “centerpiece” of their digital lifestyle.

The reason why, the event was called “Wake up your phone” was to explain about the 8GB flash cards. With a high capacity memory card, users can ‘Wake Up Their Phone’ and turn their handset into the ultimate lifestyle accessory. The memory card expresses the ability to store more than 2,000 digital songs or more than 5,000 high-resolution pictures or up to five hours of high-quality MPEG 4 video.

With the high capacity SanDisk card, consumers will be able to share their storage materials with others, simply by uploading content onto social networking sites like You Tube, MySpace and Facebook. This would allow sharing the experiences they have captured on the card. Content can also be transferred through the mobile phone or through synching the card up with a PC.

“Our goal is to help people to get the most out of their phone by using a memory card. The growing numbers who do, find they have more experiences to share with friends, family and social networking sites,” said Michael Romero, Senior Director, Global Retail Marketing, at SanDisk’s Mobile Consumer Solutions Division “While many people may have a mobile phone with a built-in MP3 player, digital camera, video player/recorder or other storage-intensive features, surprisingly few realize that with the simple addition of a large capacity storage card they can use their phone to listen to thousands of songs or take thousands of photos or watch hours of video.”

The 8GB microSD card launched at the event comes with Sandisk’s five-year limited warranty. It is designed to have an operating shock rating of 2,000 Gs that is equivalent to a ten-foot drop. It is available at the price of $139.99 (around Rs. 5,525).

The 8GB M2 card is equipped with Sony’s MagicGate encryption technology support and is available at the price of $149.99 (approximately Rs. 5,912).