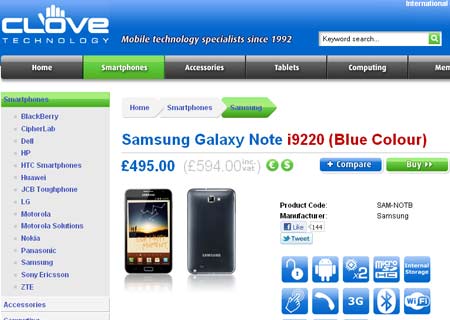 Clove Technology apparently has its hands full with smartphones these days as it recently announced the Samsung Galaxy Note price and availability details. Along with this, the retailer recently brought forth the unlocked version of the HTC Explorer as well as the Sony Ericsson Xperia Play amongst other devices.

The Galaxy Note is touted to be the smartphone with the largest touchscreen yet, which diagonally measures 5.3 inches. The company also puts this one forth as an efficient gadget which diminishes the need of carrying around a tablet, a smartphone, the conventional notepad, and several other personal portable devices at the same time.

Late last month, there was buzz about this device landing in Europe around November, with Germany as its first destination. But we’ve barely started with the month and Clove is already showing of the blue backed variant of this device as part of its stock.

With the massive touchscreen claiming to suffice for a suite of on the go tasks, the Galaxy Note also offers a stylus which is christened the S Pen. This stylus blends in as a part of the handset, thanks to the niche designed for it to hide within. The touch display allows users to navigate with their fingers or simply doodle with the S Pen.

Powered by a 1.4GHz dual core processor to support the sort of multitasking needs it is designed for, the handset offers network connectivity options like HSPA+ and LTE. The rear facing 8MP camera is equipped with LED flash, while the front facing 2MP one facilitates video calling and more.

The Samsung Galaxy Note price quoted by Clove UK is £594, inclusive of VAT. The first stock of the device in question is expected to land on November 3.