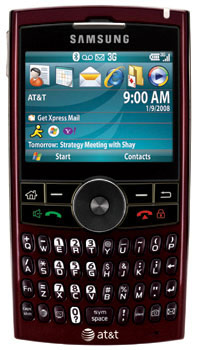 On 23rd October,2007, AT&T along with Samsung officially announced the launch of the BlackJack II smart phone. This device is a sequel to the initial BlackJack but sleeker and uncomplicated with more style.

BlackJack II is equipped with Global phone capabilities that include Tri-band 3 G UMTS/HSDPA and Quad-band EDGE/GPRS technology. It takes benefit of AT&T’s industry-leading international wireless footprint and accesses to e-mail, the Web and other data applications in more than 135 countries; this includes Japan, South Korea and China. The customer is also privileged to make or receive phone calls in more than 190 countries. AT&T’s 3G-enables the device with the similar look and feel of the computer desktop with Windows Mobile 6.

For business-oriented customers, AT&T’s smartphone brings a powerful computer experience to the small screen. The device keeps track of schedules and contacts through Outlook Mobile. It allows browsing Internet by using Internet Explorer Mobile, as well as manages Word, Excel and PowerPoint documents using Office Mobile. Windows Mobile 6 also supports HTML e-mail so that people can view and compose e-mail messages in their native format with live links to Web sites, support for images, tables and bullets. It acts like a “Pocket-Sized” Personal Computer.

Being a part of this generation, BJ II is operational with 2.0-megapixel camera, recording photographs and video. A louder and clearer speakerphone, stereo Bluetooth technology, with stereo headset support, An RSS Reader Client, Windows Media Player 10 Mobile will always connect the users with entertainment. BlackJack can accelerate Entertainment on one’s Fingertips.

Jeff Bradley, senior vice president, Marketing and Operations for AT&T’s wireless unit, said “The BlackJack II takes one of AT&T’s most popular smart devices and adds to it a whole new level of functionality and capabilities, this will provide business people and consumers alike with an even more powerful and complete communications and entertainment tool backed by the largest domestic and international wireless data footprint of any U.S. carrier.”

AT&T’s provides BlackJack II users with typical download speeds from 600 to 1,400 Kbps, similar to its BroadbandConnect network that is available in more than 200 major metropolitan areas throughout the U.S.

The slim and compact BlackJack II smart device is expected to be available by the end of the year for $149.99 with a two-year contract in the United States.