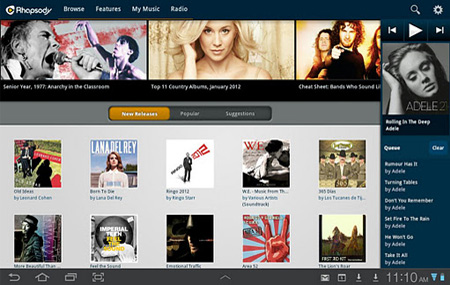 The Rhapsody music app for Android tablets was recently introduced into the tech terrain. This popular music service allows audiophiles to discover new music, know more about various music artistes and experiment with a number of guides, playlists and features, among other features.

The application could appeal to music enthusiasts as it is replete with a variety of reviews, videos, playlists and features created to guide subscribers through Rhapsody’s expansive collection of 14 million songs spanning almost 600 musical genres. Android tablet owners can stream the Rhapsody catalog via the internet as well as download playlists to their slate and store them for future listening when offline.

“We didn’t just resize Rhapsody – we re-imagined the entire experience for the tablet. It’s your companion on the couch, in transit and out in the world, and therefore people experience music and consume content differently than they would on a computer, portable device, TV or home audio system,” cited Brendan Benzing, chief product officer, Rhapsody. 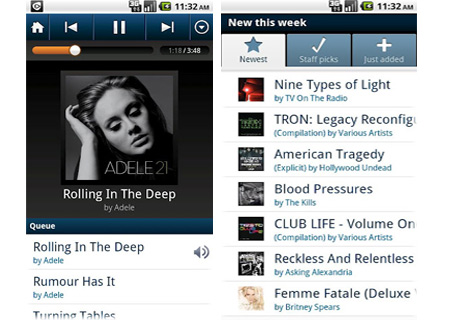 “We are dedicated to creating a premium experience that consistently brings value to every aspect of the Rhapsody service. The tablet app delivers on this promise by providing more than just access to music—it’s a guided tour of millions of songs and a musical canvas for a myriad of experiences, from collaborating with friends to build a party playlist by passing the tablet around the room, to providing a soundtrack to a recipe or an e-book,” added Benzing.

The Rhapsody app has specially been optimized for tablets running on the Android OS and aims to recreate the magic of physical albums and CDs, something which nostalgic users may miss in this age of digital music. It features album art and photos that resemble a real CD package.

The Rhapsody music app for Android tablets can now be downloaded for free from the Android Market and the Amazon Appstore.