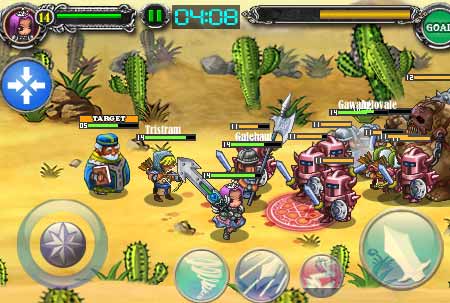 Mo-star has announced the release of their battle game for iPhone called the Princess Fury. This well illustrated action game brags a mixture of classic arcade style and a true battle system.

In the gameplay, players strike down their enemies with the combined power of servants and soldiers. By means of eye-catching swordplay and magic, players can fight over 100 enemies at once in heroic battles that rely on collaboration with various forces with competence and courage.

Qin Yi, general manager at Mo-Star said, “Most of our developers grew up playing arcade and console games, so our goal with Princess Fury was to provide a console quality gaming experience, suited to the mobile player. We spent lots of time making the controls sharp, the battles fun and exciting, and fine-tuning the sound and graphics effects; and now we have created a game that we enjoy playing, and we hope fans will enjoy it too.”

The Princess Furry discovers exciting features that include 20 new challenging stages including Ancient Forest, Despair Desert, Lava Land and Castle Fortress. It displays 5 mission types namely elimination, defense, capture the crystals, escort and boss battles. Players can go over their favorite stages to gain experience and strengthen the Princess’ skills. It offers detailed artwork with easy-to-use controls on iPhone. It includes powerful battles with over 100 characters on one display. It defeats hordes of enemies with simple but deadly controls. Numerous servants and soldiers are ready to strengthen Princess Fury’s battle services. Each type of servant and soldier incorporates unique skills and abilities.

The game is available to consumers in six languages, English, German, French, Spanish, Japanese and Chinese.