The OnePlus 5T Star Wars Limited Edition has officially gotten announced by the company at Comic Con Bengaluru. The handset is set to get its own launch event on December 14 at 7 pm in India.

You can snap up tickets for the occasion by paying Rs 999 via Paytm on December 7 at 10 am. For that much, you’ll get an official Star Wars T-shirt worth Rs 999, a Star Wars Laptop bag worth Rs 1999, free drinks and popcorn, and the chance to check out the OnePlus 5T Star Wars Limited Edition after the event is over.

The new OnePlus 5T variant will then go up for sale on December 15 via the brand’s site and Amazon India. It’s the same day Star Wars: The Last Jedi is getting released, making it a convenient bit of corporate synergy. Sadly, the firm hasn’t disclosed its price or spec details yet. 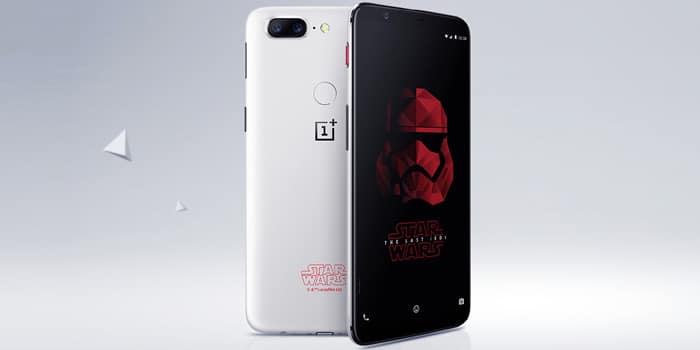 Specifications of the OnePlus 5T at a glance:

The biggest difference is clearly the design. The OnePlus 5T Star Wars Limited Edition has a black front and white back. The rear surface also has the Star Wars logo at the bottom in red. Another splash of red is present in the form of the alert slider.