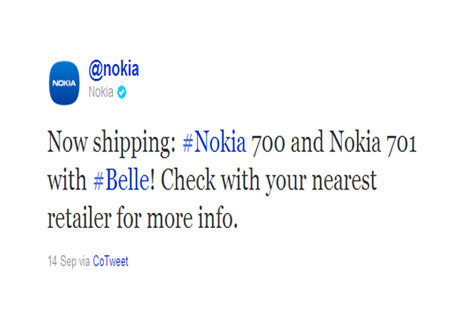 Nokia has declared through its official Twitter page that it has started shipping its 700 and 701 mobile phones. This announcement follows Nokia’s recent declaration about releasing three new handsets running on its new OS, Symbian Belle, in the third quarter of this year.

According to the tweet, various retailers are going to receive the said mobile phones within some days. Measuring only 110mm x 50.7mm x 9.7mm and weighing 96g, the Nokia 700 is said to be one of the smallest smartphones. Powered by a 1Ghz processor, it embeds a 3.2-inch AMOLED screen ClearBlack display. The handset features 2GB of internal memory which is capable of being expanded up to 34GB via microSD cards. It comes with single-tap NFC sharing and pairing capabilities. The latest smartphone equips a 5MP full focus camera with LED flash and enables video capture in HD.

The sleek Nokia 701 comes integrated with a 3.5-inch ClearBlack display. It lets users share content and stream audio wirelessly to headphones and NFC-enabled speakers. Based on the popular Nokia C7 design, the new handset also operates on a 1GHz processor and equips an 8MP full focus camera with dual LED flash and 2X digital zoom. This phone incorporates 8GB internal memory which can be expanded up to 40GB by installing a 32GB microSD card.

The official tweet suggests those eager to purchase the Nokia 700 or 701 to check with their nearest retailer as the company has already started shipping the mobile phones. Now, lets see when the Nokia 600 will commence its shipping.