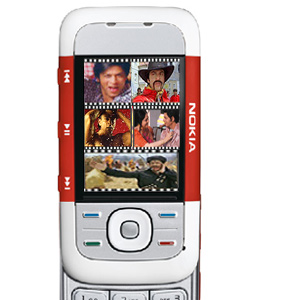 Nokia has always rendered the best ever user experience. This time too Nokia has brought the best for its users. Nokia has officially announced its association with Bollywood’s long-awaited blockbuster, Om Shanti Om (OSO) to provide exclusive value-added services (Vas) to its users. This association will give Nokia users the chance to exclusively watch OSO movie clips, behind the scenes videos, ring tones and wallpapers on their mobile phones.

Bob McDougall Director sales of Nokia India said, “Mobile entertainment is a key pillar of our strategy and is poised to drive the mobility industry in a big way. Through this tie up, we will bring alive our vision of combining internet and mobility to provide consumer an enhanced media rich mobile experience.”

“Bollywood is the most popular downloads mobile content besides sports and fashion in India. We are confident that OSO crazy and the other exclusive OSO content will provide our consumer an enhanced media rich mobile experience,” he added

A special OSO Crazy ‘Mobisode’ has been created by Nokia for all Nokia GPRS-enabled mobile phones. It is actually an animated character of OM (played by Shah Rukh Khan) in OSO. These characters include OM- the Cowboy; OM-the friend; OM – The Dacoit; OM –The Thinker: and OM – The Super star. The video will be short episodes dubbed in Shah Rukh Khan’s voice himself and can be downloaded by sending OSO as SMS to 55555.

Not only the Mobisode but Nokia is also hosting a ‘meet and greet’ contest for the leading star of the movie, On Shanti Om. The buyers purchasing Nokia 5311, Nokia 3110 Classic, 3500 Classic, 5200, 5300, 5700, 6233 M or 6300 will get a chance to answer a question on Nokia and OSO. Based on a lucky draw, 40 couples across India will get the chance to meet OM (the lead actor, Shah Rukh Khan) in Mumbai, in early December, 2007. All the expenses including travel and stay for the contest will be borne by Nokia.

Superstar Shah Rukh Khan commented on the association by saying, “This unique platform represents the blend of two of the fastest growing sectors in India- entertainment and mobility. The association with Nokia has been great and the team at Nokia has created some truly amazing fun animations of the character of OM Shanti OM. Shah Rukh Khan further added” OSO is a film for all with wholesome entertainment.”

The contest as well as the OSO Crazy animated caricature will be available exclusively from Nokia special website created for Nokia and OSO association.