An image that displays what is supposed to be the latest device from Nokia has appeared on the web, and the phone will reportedly go by the title of Lumia 950. The information is as obscure as it can get and readers should therefore be a little wary of the gossip circling around.

WPCentral, who received this latest tidbit from an unidentified source, has cast more than its share of doubts on the credibility stating that it couldn’t really vouch for the news. The tipster has not only sent across the purported picture, but also let out a couple of intriguing particulars about the smartphone. 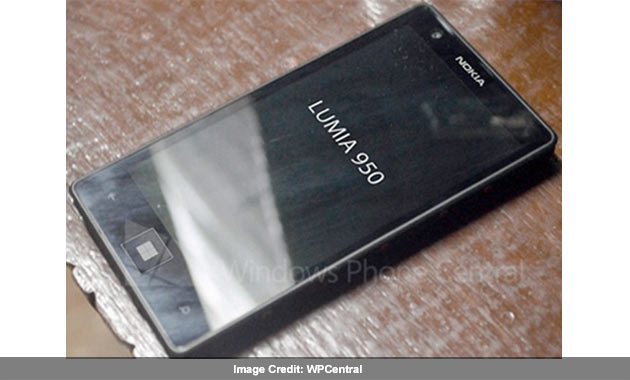 Apparently, the primary highlight of the Windows Phone 8 device is supposed to be its battery life. However, exactly how long the charge is deemed to last, is something we haven’t been exposed to. And as there are no impending plans of providing 1080p support for the OS, potential users will have to make do with a display possessing a resolution of 1280 x 768 pixels. The report goes on to reveal that the touchscreen will be an AMOLED variant of the Lumia 920’s PureMotion HD panel.

Photography buffs might be a tad disappointed with the declaration of the 41MP camera sensor not showing up on this phone either. What could come as a bit of a comfort is that it will be bigger than those of most devices and should provide ‘lossless zoom’ and oversampling. Also, the lens will be enabled to deliver in dimly-lit conditions and will come equipped with a Xenon flash. Internal specifications are scarce and 2GB of RAM is the only detail which has come to the fore.

The name has apparently been conferred to reminisce about the company’s good old N95 days. The picture shows us a black monochrome handset and the Windows Phone logo pasted bang in the middle of two buttons. Bearing in mind the splashes of bright colors which adorn other smartphones from the series, it wouldn’t be too presumptuous of us to say that the black shade could be reserved just for the prototype. Though the device itself looks legit, other details like the logo and the aliasing look like they’ve been tampered with.

So far the Nokia Lumia 950 was anything but talked about, and now with all the hubbub surrounding the handset, it’s hard to say if this is something we should look forward to or not. Having said that, as and when something more comes our way, we shall be putting it up as soon as possible.

Rumored specifications are listed below: