The Nokia Lumia 625, the largest smartphone to have been crafted by the Finnish manufacturer in this particular range, has been put up for pre-order in the country through Snapdeal. The portal has refrained from letting out the price details of the Nokia phone, but interested users can pre-book it by paying up just Rs 1000. It is not likely to knock on potential buyers’ doorsteps anytime before the last week of this month. The phone can also be seen listed on Homeshop18 with a coming soon tag.

Also, it should be noted that Nokia hasn’t gone on record to confirm anything about the Lumia 625 phone’s availability, although its Indian website does say that the gadget is coming soon to the country. But this is definitely not the first device to have gone up for pre-order without an official notice, many others in the recent past made their debuts in the subcontinent through various shopping portals. The smartphone’s very own sibling, the Lumia 925 is also one of them. 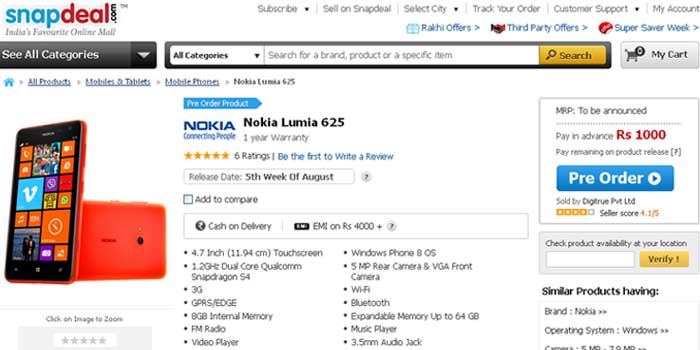 Let’s take a quick look at the handset’s specifications. The phone graced by a 4.7-inch AMOLED IPS HD touchscreen, is armed with dual cameras. A 5MP snapper is glued to the rear panel, while a VGA lens has been placed in the front. The Windows Phone 8-based gadget integrates a 1.2GHz dual core Qualcomm Snapdragon S4 processor as well as 512MB of RAM and features 8GB of onboard storage which is expandable by up to 64GB.

As we already said, we have no clue about the exact price of the Lumia 625, but it definitely comes across as a budget-friendly device.