Nikon has made its entry into the action camera segment with the launch of its KeyMission series in India that comes in three variants – the KeyMission 360, 170 and 80. The brand hopes to compete with GoPro which has been a dominant player in the sector.

The KeyMission 360 was introduced by Nikon in January this year. The shooter can capture 360-degree videos in 4K UHD resolution using the dual lens system on its body. It combines shots from both its 1.6mm, f/2 lenses to form a single cylindrical image. The device is protected from water, dust and freezing temperatures, factors that make it adaptable to strenuous outdoor activities. 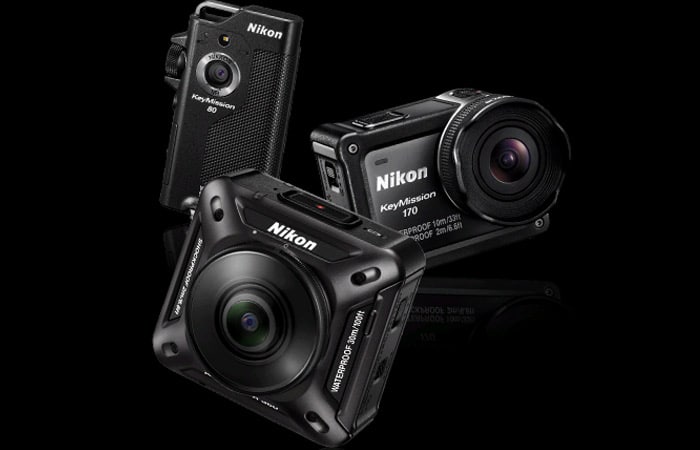 You can share your adventures using your smartphone through the SnapBridge 360/170 app developed by Nikon. The service can also be used for live-streaming videos. The KeyMission 360 comes with two AA-14A lens protectors and a microSD card. The Nikon KeyMission 170 has the same video resolution as the aforementioned camera, and a 1.5-inch LCD screen.

Fitted with an F/2.8 lens, it shoots films in a 170-degree angle as well as can also be used for time lapse photography. The action cam works with the SnapBridge 360/170 app. Users can also hook it up with PCs or laptops for editing their content via the KeyMission 360/170 Utility software. The KeyMission 80 has been created to take quick shots easily, as claimed by Nikon.

Its compact design allows it to fit into the user’s hand without difficulty. Images are captured by the 12.4MP lens and the 4.9MP secondary shooter. The water-, shock-, dust- and freeze-proof device offers time lapse, panorama and HDR shooting. A 1.7-inch touchscreen is present on its body. Nikon claims that this camera can take around 220 shots with a fully charged battery.

The price of the Nikon KeyMission action camera series in India is yet to be announced. The trio is likely to be available in the country from November 2016.