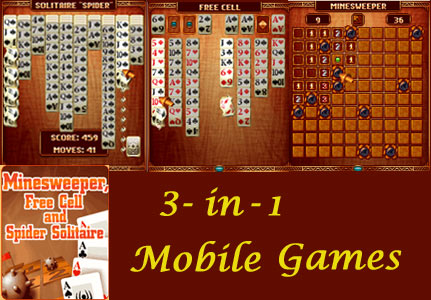 Games which are now being introduced on mobile phones are either remakes of PC games, from movies or Nintendo or console games. So here’s another PC game which is going to be seen on mobile phones. The three worldwide known computer games Spider Solitare, Free Cell and Minesweeper puzzle will now be available on the mobile platform.

Minesweeper: It is a game where players have to guess where the mines are, by using nearby fields and the player has to mark all the dangerous cells with flags.

Spider Solitaire: In this game the player uses several card decks. The goal is to put all the cards in descending order. If the player is out of moves then he needs to use the deck to replenish the columns.

Free Cell: This is a card game. Here the player needs to put the cards in ascending order by using the four cells.

The special features of the three games include:

These mobile games are compatible with a majority of the brands which include Alcatel, BenQ-Siemens, Fly, LG, Motorola, Nokia, Panasonic, Pantech, Sagem, Samsung, Sharp, Siemens and Sony Ericsson. In due course, these mobile games will keep improving regularly to offer compatibility to a bigger range of handsets.