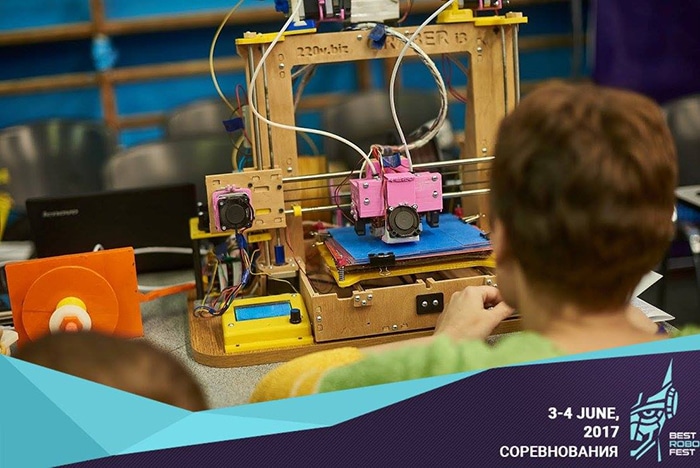 In June 2017, the stadium Meteor in Dnipro opened its doors for the largest engineering show in Ukraine – BestRoboFest 2017. This annual family techno-picnic, where everyone can find something for themselves, is organized by Association Noosphere under the leadership of Max Polyakov. This year the event took a step forward, receiving more than 10,000 visitors in 2 days. They were entertained by almost 200 different robots assembled by young engineers from all over Ukraine.

The main part of the event was the competitions, which took place in 5 categories: Copters Race, Robo Race, Robo Sumo, Scratch, and Freestyle. Many of those who were impressed by the competition, felt like engineers themselves. Various workshops on the basic robotics WeDo, Scratch + Arduino and 3D prints, piloting mini-drones and rocket-modeling and much more took place at the festival.

Max Polyakov believes that such competitions for young engineers will be an excellent platform for their development, and the development of a technological environment in general, which in the future, will take Ukrainian industry to the next level.

Knowingly wearing the title of a “family event” the festival had something to surprise everyone, not just tech-lovers. For the youngest guests, a play area was created, with various outdoor games and entertainment. In the Art Zone, contemporary artists painted their fantasies on the theme of robotics during the festival, allowing viewers a glimpse of the creation of something grandiose.

A lot of attention was given to the expo-zone with technological novelties. Among the companies and laboratories that submitted their developments, was the Noosphere Engineering School, a joint project between Max Polyakov’s Noosphere and Ukrainian universities. It demonstrated projects such as ArtOS, PowerBox, and MyPolice.

Also, live performances by young vocalists and dance groups, and the Food Zone allowed everyone to fully enjoy the event.

One innovation of the festival was the MonsterCarsUA exhibition, the first contest of crazy auto and moto creativity in Ukraine.

Unique homemade choppers, bicycles, cars tuned like monsters, and other unusual wheeled creations came from various cities to compete for the main prize. For prize-winners of the contest, Max Polyakov, together with Association Noosphere, established cash prizes of $1000, $3000, and the main prize of $5000.

Third place was awarded to Jaroslav Lutitsky and his bicycle “Beckman”. Alexey Kodenets won second place with his unreal fire-breathing car “Thrasher”. And a check for $5000 went to the bicycle “ZbochinetS” that was built in a steampunk style by Anatoly Eremeev. Moreover, Anatoly also won a grant to create a new project called “343 Track” that promises to impress audiences at MonsterCarsUA 2018.

Max Polyakov commented that most of all he was glad to see that the number of spectators and participants has doubled since last year. Such a positive reaction to BestRoboFest showed that Ukraine needs such events.

Association Noosphere is already preparing to continue supporting engineering creativity at BestRoboFest 2018. After all, what is a better way to attract young minds to develop in the field of engineering than such grandiose shows?