The 2K display-equipped LG G3 smartphone which has been creating waves worldwide owing to its top components, has finally been brought to India by the South Korean manufacturer. The device’s 16GB capacity with 2GB of RAM costs Rs 47990, whereas its 32GB version bearing 3GB of RAM is available for Rs 50990.

As part of the brand’s new association with Amitabh Bacchan, LG will be releasing as many as 15000 limited edition handsets of the G3 which will feature autographs of the veteran Bollywood actor on the rear shells. Every unit of the phone will come bundled with the special Quick Circle case designed for it, while buyers will also be able to grab a Rs 5000 discount on the LG G Watch. 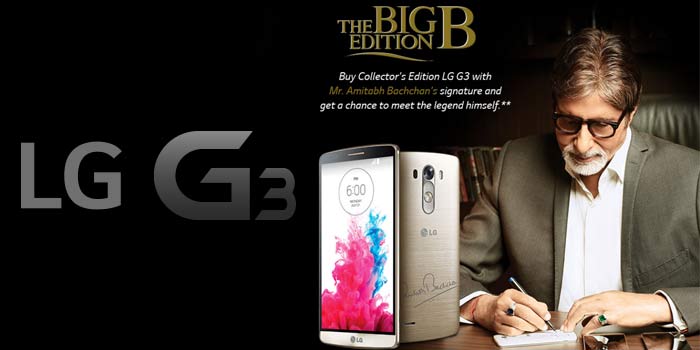 Equipped with a Qualcomm Snapdragon 801 chipset bearing a 2.5GHz quad core CPU, the LG G3 handset is highlighted by its 5.5-inch Quad HD display which proffers 2K resolution. A 13MP camera has been placed on its rear surface, offering OIS+ for improved stability and Laser Auto Focus for quick and accurate focusing of images. A 3000mAh battery which lasts for almost a day of average use also forms part of the offerings.

Here’s a quick look at the specs list of the LG G3:

Although the G Watch has been available in the country for quite a few days, the unveiling event of the LG G3 smartphone also witnessed the official launch of the Android Wear smartwatch.