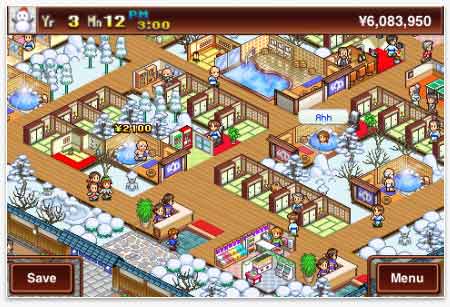 From the makers of Game Dev Story which entailed users to run a video game development studio, comes another exciting offering. Kairosoft has announced the release of its game dubbed Hot Springs Story for iPhone, iPod touch and iPad users.

Attracting VIP guests like pop stars and novelists requires crafting picturesque gardens from pine trees, lanterns, azaleas and more. Merely turning the Apple device will rotate the game screen, while pinching the screen is enough to zoom in or out.

Zoom and screen rotation features are available only on iPhone 3GS and later versions, iPod touch 2G and higher devices as well as iPad. In addition, the title can be switched between Japanese and English languages.

Hot Springs Story may be acquired through the iTunes App Store at a price tag of $3.99.