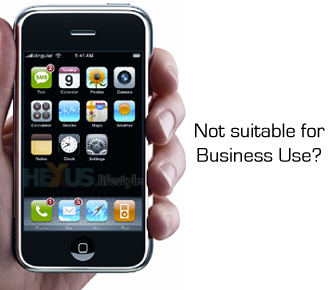 The revolutionary Apple iphone, launched this year in June has certainly become a hit with consumers. It has quickly become one of the most popular smart phones to have. Like the BlackBerry, which is a popular smart phone especially for business users, the iPhone too seems like a lucrative one. Business users who have purchased the iPhone for their personal use have since been asking their corporate IT departments to support it.

Whether the iPhone is a powerful and valuable business tool remains to be seen. A new report from Forrester Research has suggested that the iPhone may never get a chance to success in business.

Here are the top 10 reasons presented by Forrester why IT departments should refuse to support the iPhone: