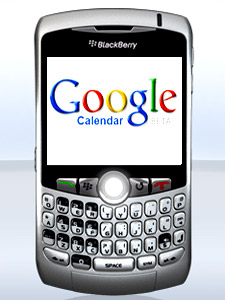 Are you a frustrated Blackberry user who is pissed off at the fact that the Google Calendar cannot be synced with your handheld? Well, wipe out that scowl from your face as Google has now come up with a free download that will enable BlackBerry users to access their Calendar feature.

This application can be downloaded using the web browser of the BlackBerry. Alternatively, users can also install Google Calendar on their computers that have the BlackBerry desktop software and then just install it via a USB connection to the BlackBerry. Though Google had made available a mobile version of Google Calendar some time ago, users of the RIM smartphones were not able to use it. There were third party applications like GooSync and SyncMyCal, which were available but then there is nothing like the app from the main creators of the app.

One advantage that that BlackBerry users will have by syncing the Google Calendar is that they will be able to view their schedules at places like subways or airplane, where the wireless reception is unavailable or very poor. Google has still not said anything about the plans to let the BlackBerry users sync Gmail or the contact list in Gmail to their handheld. Also, there is still no word whether Google Calendar or Gmail could be synced to the iPhone, which has become such a rage worldwide.