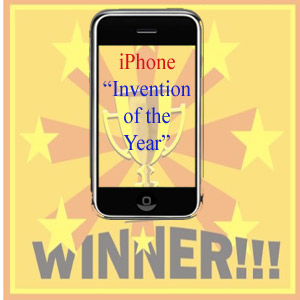 Time has mentioned several reasons to why iPhone is awarded as the “Invention of the year”. The form factor, features and functionality of the device is of course attractive. Moreover, the sales figures of the phone makes the general public realize about what is actually needed in a mobile computer.

The stability of iPhone has made the wireless industry aware of its importance. iPhone is also setting its identity in the stage for future in which mobile computer will gradually occupy a larger part of the world.

TIME Staff Writer Lev Grossman differentiates iPhone from other products by saying “Intel’s 45-nanometer, that’s a serious deal, but it’s a lot less glamorous than the iPhone even though it’s important”.

Time Magazine has always chosen the best among the latest technology that includes recent Invention of the Years like “You Tube” and “SpaceShipOne”. The attractive iPhone suits Business class people as well as the youth, making the world small through technology. Hence, the Invention of the Year award is well-deserved for Apple’s iPhone.