The Huawei Ascend P2 gives us a glimpse of its looks by stepping out for a quick press shot. Not only did the company recently introduce the Ascend D2 smartphone which has the largest screen so far, but also it will now be journeying to Barcelona for the MWC with an intention to officially unveil the successor of the P1.

Some of the key specifications of the Ascend P2 appear to have tagged along with the image. For instance, the smartphone houses a 4.5-inch touchscreen display which is slightly bigger than its 4.3-inch predecessor. Also, it can broadcast pictures and videos in full HD, a pleasant development from the P1’s 540 x 960 pixel resolution. 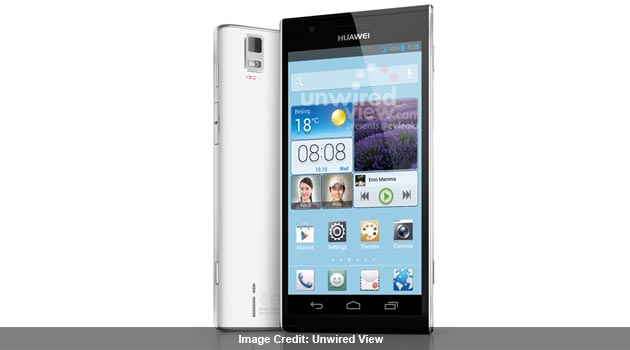 The phone will apparently be optimized for the Jelly Bean OS, but the platform’s version hasn’t been specified as yet. So let’s just keep our fingers crossed and hope for Android 4.2 onboard. Irrespective of the thin form factor that the handset shows off, the company has managed to cramp in a 13MP camera.

Users might have to squint their eyes a bit to spot a speck-like lens, posted next to the Huawei branding on the front panel. It is hard to say how much internal memory space the handset will proffer, but currently 2GB of RAM seems like a fairly good deal. Also, a 3,000mAh battery should be responsible for powering the device throughout the day.

A post on Unwired View brings to our notice that even though a 1.8GHz quad core processor has been fitted within the phone’s chassis, the manufacturer’s very own K3 SoC may be considered as a drawback while competing against Qualcomm’s Snapdragon and Nvidia’s Tegra processors. But on the brighter side, the CPU is said to be based on the modern ARM architecture.

A precise release date for the Ascend P2 hasn’t been chalked out still. However, it is presumed to be unwrapped at the MWC in Barcelona in the month of February. The company may also reveal the price details along with the unveiling, or may choose to disclose it sometime close to the launch date.

Let’s quickly run through the anticipated specifications of the handset: