According to the Ministry of Electronics & IT (MeitY), the Indian government’s demonetization scheme has brought 25-lakh rural citizens into the world of digital payments. More than 55000 merchants have begun accepting such modern methods of transaction across the country, while 70% of customers in non-urban areas have started using some sort of electronic wallet or the other.

In spite of this, 95% of money spent on personal consumption expenses in India was studied to be cash-based (as on December 15, 2016). The government’s widespread efforts to get the majority of citizens to use UPI, USSD, RuPay cards, Adhaar-enabled payments, NEFT and debit/credit cards at PoS systems has clearly not been enough. So it has announced several tempting incentives under its Lucky Grahak Yojana and Digi-Dhan Vyapar Yojana schemes. 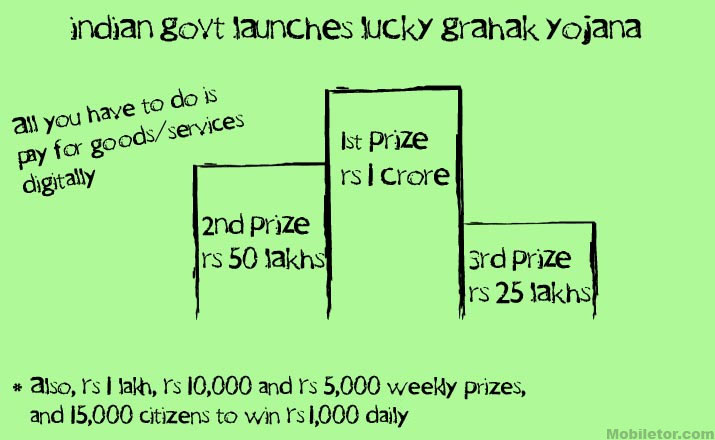 Lucky Grahak Yojana has been launched to encourage consumers to go for digital payment methods for everyday transactions. Digi-Dhan Vyapar Yojana will give cash rewards to merchants accepting money through e-wallets, PoS machines and so on. The National Payment Corporation of India (NPCI) will be in charge of the whole affair.

The first lucky draw will be held on December 25, in celebration of Christmas. Over a period of 100 days, 15000 citizens stand a chance to receive Rs 1000 as part of Lucky Grahak Yojana. The scheme will also award weekly prizes of Rs 1 lakh, Rs 10000 and Rs 5000 to random winners who use digital payment methods (credit cards and e-wallets excluded).

Of course, all eyes are going to be on the three Mega Prizes of Rs 1 crore, Rs 50 lakhs and Rs 25 lakhs, the winners of which will be announced on April 14 next year. These will be picked from those who made digital payments between November 8, 2016 and April 13, 2017. The incentives will restricted to transactions of Rs 50 to Rs 3000, so as to include as many people as possible.

The three Mega Prizes for merchants will be worth Rs 50 lakhs, Rs 25 lakhs and Rs 12 lakhs. The winners will be revealed on the same day as the awardees of the Lucky Grahak Yojana super draw. Digi-Dhan Vyapar Yojana will also be giving away prizes of Rs 2500 to Rs 50000 to vendors on a weekly basis. The winners will be picked from a random draw of Transactions IDs.

These are generated automatically when a digital transaction is completed. The Indian government is expected to spend up to Rs 340 crore on first phase of these lucky draw contests.