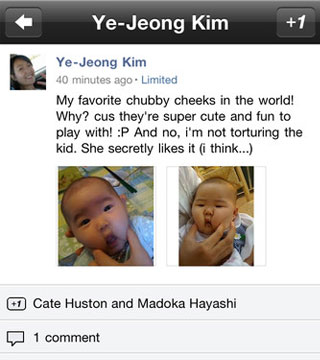 With Facebook announcing renovations for its iPhone app, Google+ has made no delay in introducing the much demanded reshare feature and other updates for the Google+ app for iPhone. This development follows the introduction of similar features for Android devices, with iPhone users wanting a revamped app too.

An update for its Android app was rolled out by Google+ a couple of weeks ago. This included the resharing feature for posts, support for around 38 languages, bugs and other performance fixes with minor UI tweaks. And there’s no reason why iPhone users should not be demanding similar improvements for their version of the app. These updates which were released after an interval are now expected to perk up the Google+ experience on the iPhone.

The most significant of the changes which shall be introduced in the Google+ for iOS app by the updates is the resharing support. “We have a new version of the Google+ iOS app (v. 1.0.3.2124) that features resharing posts!” posts Punit Soni, Lead Product Manager, Google+ Games and Mobile.

Other changes to be welcomed on the Google+ app for iPhone include the creation of new circles from the circle destination, and better auto complete function in the huddle feature. Also, fixed two-step verification issues are being introduced along with accurately refreshed notifications when returning to the app.

The updated version 1.0.3.2124 of the Google+ app for iPhone is now available for download via iTunes.