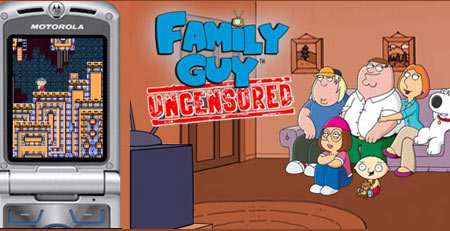 Freaking’ Sweet! Glu Mobile revealed the launch of a new game called Family Guy: Uncensored for mobile phones all over the world. This new Java/Brew mobile game is based on the Fox’s comedy series, Family Guy. The game launches before the 8th season of the show hits TVs.

The show is based on a semi-dysfunctional family living in the fictional town of Quahog and Rhode Island. It is claimed to be the leading animated series among adults in the 18-49 age group and teens on television. The show is about the family’s hilarious antics and quirky personalities.

Jill Braff, senior vice president of global publishing, Glu explained, “We are thrilled to bring Family Guy’s memorable moments and non-stop humor to fans worldwide. The Glu team has worked meticulously to create a game that not only entertains but also accurately represents Family Guy’s trademark humor, from sadistic baby Stewie and his eccentric father Peter to Quahog’s unique locale, always staying true to the style of the show.”

The action packed game offers the players a speedy and frenzied pastime with the ability to explore multiple levels of amusement. The player can also be in Quahog visiting familiar locations including Spooner Street, Goldman’s Pharmacy, The Drunken Clam and City Hall. The excitement continues with choices to play as Stewie, Peter, Brian, Chris or Quagmire. In addition to this, there are cameo appearances by popular Quahog characters that pop up throughout the game. The title offers 7 mini games featuring Robo Stewie, Rocket Brian, Peter vs. Chicken and more.

While the game will be released with high end devices later this year, it is available now through all major carriers globally for mobile phones.