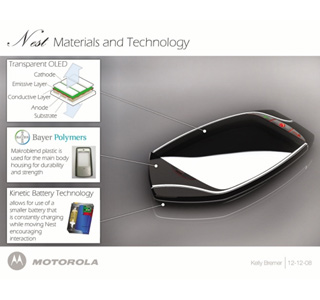 Motorola has unveiled a new concept phone that is codenamed the Nest as it apparently has the shape of a nest. The Motorola Nest possesses a back-to-back touchscreen functionality and has a stylish and unusual design.

The touchscreen also works as a mirror. The phone acts like a virtual scrapbook, targeted at creating an interactive social network. There is a pattern on the back of the phone and it has a sliding unlock.

Motorola had earlier come up with a concept phone that could multi-task with its dual cameras. The camera setup of the phone was one of a kind, where both cameras were placed side by side at the back of the handset. 3D images could also be created, thanks to a special feature in the camera and many other innovations were possible in this concept phone.

Since the device is yet in concept stages, thus details about the release date and pricing of the Nest Concept phone are not available as of now.