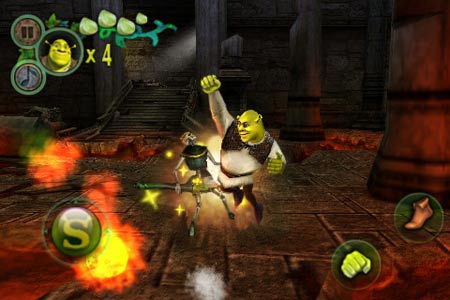 Gaming aficionados are going to love the word sale especially after they find out that the price of a well appreciated game has been cut down to a mere $0.99 only. Gameloft has just put up the sale board for Shrek Forever After for 99 cents!

In this game, Shrek has been duped into signing a pact with king Rumplestiltskin. Subsequently he figures out that it is a twisted version of Far Far Away wherein ogres were hunted. Players need to step into Shrek’s ogre shoes to save his friends and win back his love, Fiona. Furthermore, gamers can also opt to be the Donkey or Puss In Boots.

This title is loaded with 11 stunning 3-D levels packed with a plethora of entertainment options. Real Tennis HD a game designed for iPad owners also features into this list selling for a discounted price. Moreover, we hear that even Prince of Persia: Warrior Within was initially available for 99 cents however, now its back to $4.99.

Shrek Forever After is now retailing on the App Store for $0.99 only.