You didn’t know this – people in developing countries love (are addicted to?) (are obsessed with?) social media to such an extent, they’re even more advanced in the use of such services as compared to the internet population in the US. It probably sounds strange considering that Facebook and Twitter have their roots in the US.

On the popularity of social media:

A Pew Research Center study claims that 73% of US people with access to the internet are on social networking websites. In Egypt (88%), Philippines (88%) and Russia (86%), slightly less than 9 out of 10 web users are on Facebook and Twitter. In 20 out of the 24 countries included in the survey, 7 in 10 or more participants are noted to be on the two aforesaid social networks. 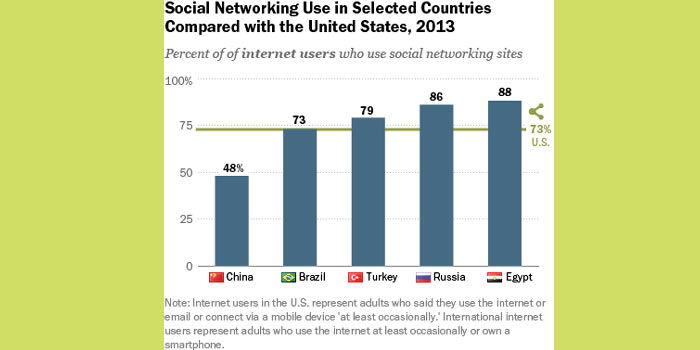 Only in China are the majority of respondents not classified to be active on social media. But then that’s China, after all. While the report doesn’t offer an authoritative opinion on why folks in the US are not enchanted by networking platforms, it does say that many Americans got online before the onslaught (in 2008 – 10) of social media and are better adjusted to sharing tools like email.

91% of US adults possess a mobile, with smartphones having taken over feature phones in terms of popularity. 55% of Americans are said to own smartphones, while 34% have feature phones. In every country involved in the poll, the population under 30 years of age are more likely to carry around a smartphone. For starters, 69% of Chinese people in the 18 – 29 age bracket have smartphones. 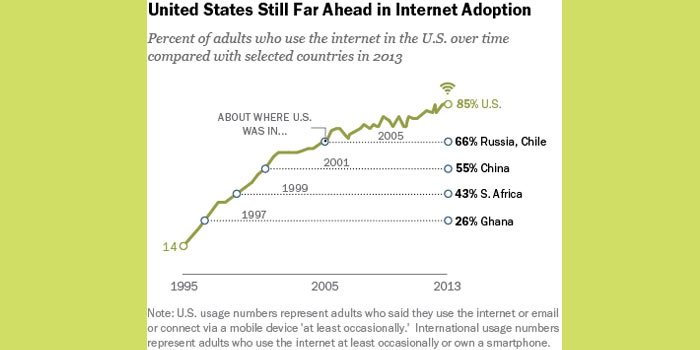 Need the nitty-gritty details of the survey? Here’s where you’ll find them.