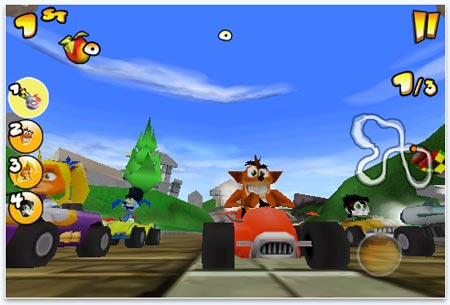 This app is the sequel to Crash Bandicoot Nitro Kart 3D that was released in 2008 and is enhanced with more attractions and adventures. It was introduced with tilt-screen controls which allow players to steer the kart by tilting the iPhone/iPod touch in steering wheel fashion. The multi-player option lets four players challenge each other and play in three different modes over the internet.

Players can compete as Crash or either one of the nine characters by increasing their speed or slowing down their opponents with the help of power-ups and weapons. Just like its previous version, this new title also features twelve tracks to race on. The app requires iPhone OS 2.1 or later versions and is around 71.8MB.

Crash Bandicoot Nitro Kart 2 can be purchased through iTunes for $9.99.