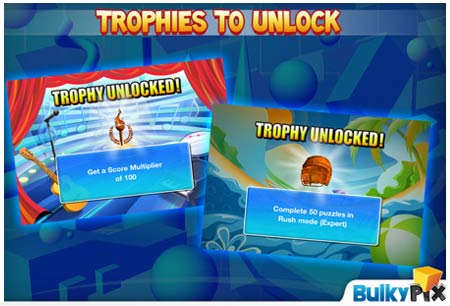 Puzzle game lovers can look forward to solving some intriguing 3D puzzles that accompany this next offering. Sanuk Games and BulkyPix have announced their latest title dubbed 3D Twist and Match for Apple iPhone and iPad users.

3D Twist and Match is a puzzle-based game where players quickly manipulate different 3D objects by rotating and spinning them to match their shaded silhouettes. It is fast-paced puzzler aimed at putting the gamer’s imagination, spatial visual skills and finger agility to the test. The title boasts of being addictive with intuitive controls which make it easier to pick up and drop figures while trying to fit them in.

It features over ten diverse themes such as Halloween, Christmas, Beach, Vehicles, Jungle, Food, Music, Tools, Sport and more with three levels of difficulty. The game exhibits three gaming modes to choose from, namely frenzy, arcade and free play. There are over 200 different objects to match as well as numerous trophies to be unlocked and won along with Game Center support.

3D Twist and Match can be downloaded from the App Store for $0.99.