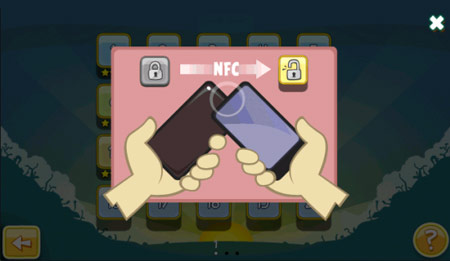 Casual gamers can now look forward to engaging in the highly addictive Angry Birds title accompanied with their dearest buddies considering this latest bit of news. Rovio, in collaboration with Nokia, has announced that its new NFC-enabled version called Angry Birds Magic will come pre-installed on the Nokia C7, as a part of the Symbian Anna update.

According to a post on the Nokia Conversations blog, Angry Birds Free with Magic consists of total twenty traditional levels laced with exciting pig-pelting action. The first five levels are normal, however in order to unlock the subsequent levels users with have to find a friend with an NFC-enabled handset. Simply touching the phone with some else’s results in seamless unlocking of five more levels. A second pal will help in unbolting another five, while a third one can unleash the remaining five.

“With Angry Birds Magic, friends can group together to combat the pig menace, in a new take on the game that so many people all over the world have fallen love with,” expressed Mikael Hed from Rovio. “This is an exclusive offering with the Nokia C7, a smartphone that really kicks off the NFC experience for developers. In time, the communal power of users with Angry Birds Magic could prove even stronger than the Mighty Eagle.”

“Angry Birds Magic is a great demonstration of NFC technology and we’re delighted to have it exclusive to Nokia. It represents an exciting opportunity for developers to create new, innovative apps and games.” commented Bryan Biniak, head of Ovi Publish, Nokia.

The title also includes an alternate way to unlock other levels in case no one is around through using NFC tags that may be embedded in any object or item. This latest game will also feature on all of Nokia’s NFC-enabled mobile devices slated for release later this year. The Rovio programmers are also said to be working on bringing the full version of Magic to Ovi Store for wider distribution.

NFC technology is principally employed for making mobile payments, however users will just have to wait and watch just how far it can be used when it comes to mobile gaming.