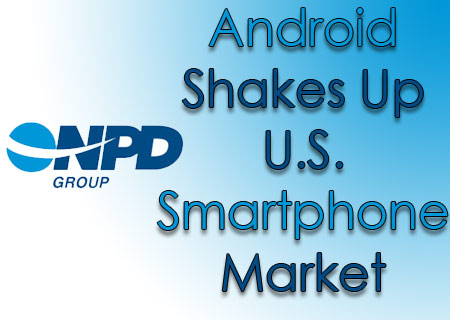 For sure, any sort of analysis derives great significance in the world of competition, particularly, if the ‘tug of war’ is between different operating systems. According to the NPD Group, the Android operating system continued to thrill the U.S. mobile phone market in the first quarter of 2010, moving past Apple to take the number two position among smartphone operating systems.

According to the research for the first quarter of 2010, there appears to have been a shift in the smartphone domain. Apple’s OS has been skirted from position number two by Android. The platform now comes next after RIM.

Apart from this, NPD’s wireless market research unveiled that based on unit sales to users last quarter of the Android operating system moved into second position at 28 percent behind RIM’s OS (36 percent) and ahead of Apple’s OS (21 percent).

“As in the past, carrier distribution and promotion have played a crucial role in determining smartphone market share,” stated Ross Rubin, executive director of industry analysis for NPD. “In order to compete with the iPhone, Verizon Wireless has expanded its buy-one-get-one offer beyond RIM devices to now include all of their smartphones.”

“Recent previews of BlackBerry 6, the recently announced acquisition of Palm by HP, and the pending release of Windows Phone 7 demonstrates the industry’s willingness to make investments to address consumer demand for smartphones and other mobile devices,” continued Rubin. “Carriers continue to offer attractive pricing for devices, but will need to present other data-plan options to attract more customers in the future.”

Pretty interestingly, the continued popularity of messaging phones and smartphones resulted in slightly higher prices for all mobile phones, despite an overall drop in the number of mobile devices merchandized in the first quarter.

To notify, the average selling price for all mobile phones in Q1 reached $88, which is a 5 percent increase from Q1 2009. Smartphone unit prices, by comparison, averaged $151 in Q1 2010, which is a 3 percent decrease over the previous year.