It may have taken its own sweet time to arrive, but the YouTube offline video support feature has finally arrived and users living in India are its first beneficiaries as it’s yet to be launched in other nations. Available through the Android as well as iOS apps of the extremely popular Google-owned service, this release enables you to download content onto your devices free of cost to view it even when there’s no Internet connectivity.

These videos are basically stored on your phone or SD card memory, but are copyrighted and can only be played using the YouTube app. Moreover, they can be viewed offline just for 48 hours after you’ve downloaded them, which is another measure Google has taken in order to avoid issues related to free downloading of copyrighted content. 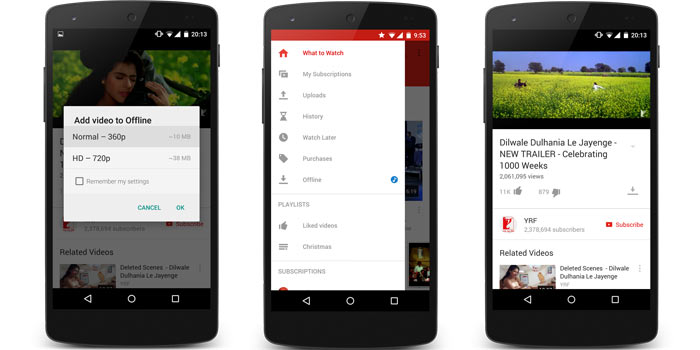 At an event in Mumbai today, the company announced that ‘much of the popular YouTube content’ generated in the country will be available for offline viewing. While it has kept things vague with this statement, it has indeed mentioned that videos from T-Series, Saregama and Yashraj Films have indeed been included in the list.

While watching a clip on your smartphones or tablets, an icon will appear under the video frame to let you know that you can download it for later viewing. You can then select the quality in which you wish to grab that particular video. Once that’s done, it will be downloaded and entered into the Offline section of the app from where you can view it even when you’re not connected to the web.

Apart from India, YouTube offline playback is also set to make its way into Indonesia and Philippines at present.