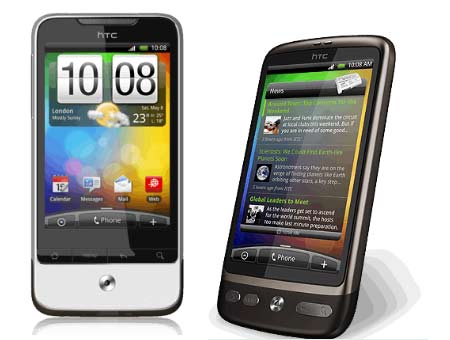 Those yenning to get their hands on an Android based device will be enthralled to know that Vodafone UK is all set to launch two new HTC smartphones, the Desire and the Legend, this April. These Android enabled handsets come equipped with a whole lot of great features.

The Legend sports a 3.2-inch, AMOLED HVGA display screen and a 5 megapixel camera which makes the phone a perfect combination for photo enthusiasts. With the impressive optical joystick, one can browse the web and videos easily. The phone will be launched exclusively for Vodafone UK users and will be loaded with the various Vodafone 360 Services including Vodafone Music and MyWeb, along with the top notch HTC Sense user interface and full authority to use the Android Marketplace for applications.

Along with the Legend, Vodafone also has plans to launch HTC Desire, which will give users the true mobile experience. With a 3.7-inch AMOLED WVGA display, it gives customers a chance to enhance their viewing of photos, videos or even socializing via Facebook, Twitter or Flickr through HTC’s Friend Stream Functionality. The Desire comes with a commanding 1GHz Snapdragon Processor, allowing one to multi-task from application-to-application, and is also integrated with full Google application.

Vodafone users in the UK have more to rejoice as Vodafone is not stopping at HTC alone, the network operator is said to soon launch other devices such as Google Nexus One and Sony Ericsson X10.