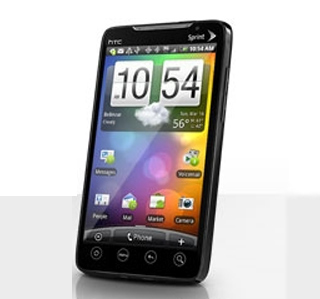 Wirefly, an internet retailer has declared that it would be selling the much awaited HTC EVO 4G once it’s officially unveiled on the Sprint Network, from June 4.

HTC EVO 4G is the highly anticipated newest Android smartphone from Sprint and touts of being America’s first 4G smartphone. The device touts to be the fastest smartphone on the market claiming data speeds up to 10 times faster than 3G networks. The handset operates on both Sprint’s super fast 4G network and its 3G Mobile Broadband Network (depending on the user’s location).

The HTC EVO 4G is loaded with a high speed Qualcomm Snapdragon 1GHz processor and the latest version of the spontaneous HTC Sense which permits users to combine several social media channels into a synchronized flow of updates. The smartphone also includes built-in mobile hotspot capability that allows up to eight Wi-Fi equipped devices to concurrently connect to Sprint’s 3G or 4G network.

Watching movies and videos becomes a totally new experience on the remarkable 4.3-inch touchscreen of this smartphone. The user friendly built-in kickstand props the screen upright for viewing while moving. The device can also be simply plugged into an HDTV with the help of its micro – HDMI port when the user wishes to watch the movie on a bigger screen. The smartphone is also adequately designed for photography since it has two cameras. An 8.0 megapixel camera with HD-capable video capture at the back and the other is a front facing 1.3 megapixel camera. However even though the smartphone is feature packed one cannot miss out on its stylish and sleek look.

Wirefly has made sure that shopping for the smartphone and its accessories can be done conveniently with a few clicks. The customer can order the handset on their website easily. The delivery of the product would be quick and free through Fedex. A number of other facilities are offered by Wirefly such as greater savings and the Wirefly satisfaction guarantee.

“At Wirefly, we pride ourselves on being among the first retailers to offer the newest cell phones as soon as they hit the U.S market – HTC EVO 4G being no exception,” states megapixel Andy Zeinfeld, chief executive officer of Simplexity, parent company of Wirefly.com. Our sale kicks off at 12:01 am on June 4 – many hours before retail stores open their doors — so those who want to secure their own revolutionary HTC EVO 4G don’t have to wait until sunrise to order it.”

Apart from the above mentioned features, the smartphone also has a concurrent voice and data ability in 4G and Wi-Fi coverage areas. The handset has an Adobe Flash technology which makes sure that the internet content such as embedded videos and animations do not lose their rich appearance. The device also includes the Pinch-to-zoom gesture and automatic text reflowing which allow easy viewing of the webpage.

The price of the HTC EVO 4G is yet undisclosed, however Wirefly claims about a straight forward pricing and great savings. So watch out for the HTC EVO 4G smartphone at Wirefly on June 4.