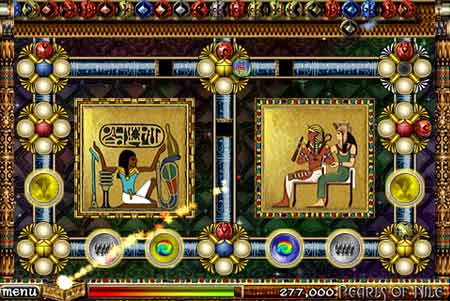 Ranging from ancient mysterious civilizations to the numerous wars fought world over, games now-a-days are based on a myriad of subjects. Digital Reality too offers a comprehensive gaming galore, with three new titles coming up namely Scarabeus: Pearls of Nile, Liberty Wings and Asteroid Miner. These immersive titles have been created by Catmoon Games and are to be released for the iPhone platform. All the three offerings are slotted to be out on the shelves by mid-September.

The Scarabeus: Pearls of Nile instantly brings the mysteries of ancient Egypt, which is one of the oldest civilizations. This title lives up to its name as it is fashioned with ornately intricate graphics which have been inspired keeping in mind the designs used by the people of Egypt. Based on an earlier PDA version, the game is a challenging and intuitive logic puzzle.

In this iPhone title, players have to maneuver rotating dials which would instigate the movement of the balls through an interlinked maze. The maneuvering should be such that sets of four same color balls come together, freeing the scarab beetle which sits in the middle of a dial. With this title, players can get lost into the ancient Egyptian feel.

Well we now jump to a few hundred years ahead with the Liberty Wings, which is based on the World War II time period. This is a classic shooting game, wherein players step in the uniforms of an Air Officer in the US Navy. Air Force officers have always required to work with high vigilance and even a minute error could be fatal. Gamers have been appointed the task of eradicating the German Atom Bomb Project positioned in six different sites. These six worlds are equipped with 18 scenes. The battle will rage from bombing modes to air combats.

Subsequently we move out of our world and into the universe which is filled with asteroids. Asteroid Miner is a blend of puzzles, entourages, adventures, resource management and much more, to offer gamers a novel gaming experience. The concept of this title has been adopted from the eighties game Dig Dug. Players have to mine and gather hidden treasures, even as First Asteroid Miner Incorporated keeps a watch over it. They can even explore more asteroids which can be accessed as an in-app purchase.

Scarabeus: Pearls of Nile is already released whereas Asteroid Miner and Liberty Wings are expected to be available by September 3, 2010. All of these enticing iPhone games are retailing in the market for £1.79.