The Samsung Galaxy Star Trios triple SIM smartphone has been launched in Brazil, merely a few days after LG Optimus L1 II Tri with three-SIM functionality went official. Nothing has been revealed about the price or availability details of the device, but it has already appeared on Samsung’s official page for the aforementioned country.

It is a very basic device and makes the most of the Android Jelly Bean 4.1 OS. Also, the handset is pretty compact as its front panel only supports a 3.1-inch multi-touch display. This TFT screen can render QVGA visuals in 240 x 320p resolution. Apart from its number of SIM card bays, the Samsung phone hardly has anything to boast about. 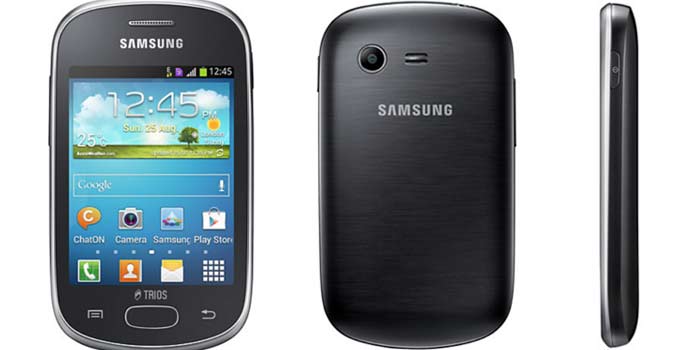 The Samsung Galaxy Star Trios’ internal working is carried out under the supervision of a single core processor ticking at 1GHz and it has 512MB of RAM for company. You can expect a single 2MP rear camera, but it doesn’t bring a webcam. All of these components are crammed within a chassis with dimensions of 61 x 106 x 11 millimeters.

And what’s more, the smartphone is compatible with 3G networks and even brings common communication options like Wi-Fi and Bluetooth. There’s merely 4GB of onboard memory which of course, is expandable by up to 32GB with a little assistance from a microSD card.

We will keep you posted about the launch details of the Samsung Galaxy Star Trios.