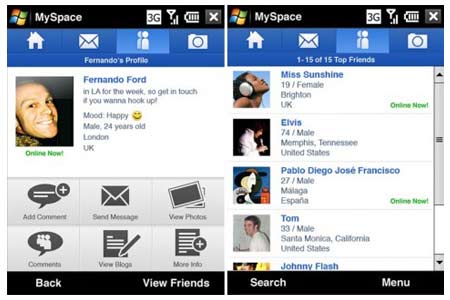 Based on Silverlight, this application will run on Windows Mobile 6.1 phones and offers rich experience to its users. The optimum MySpace mobile application has a user friendly interface that has the ability to deliver rich content on the go. MySpace integrates its main social features and functions into the Windows Mobile operating system allowing the Windows Mobile users to effortlessly access the community in a familiar way.

“Microsoft is pleased to work with MySpace to enable developers to create compelling and custom OpenSocial applications using Silverlight,” says Brian Goldfarb, director of the developer platform group at Microsoft. “By utilizing the Open Source kit released by Microsoft and MySpace, developers can now harness the power of the rich media features in Silverlight to take the user experience to a new level for the MySpace community.”

The introduction of Silverlight into the MySpace Open platform provides more flexibility and freedom to MySpace developers to design OpenSocial applications. Thus, the developers can create and deliver innovative MySpace applications.

The MySpace application will be available for Windows Mobile 6.1 phones in summer. The pricing details are not yet announced.