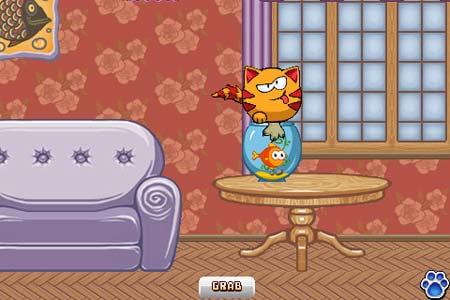 iPhone owners can now turn into affectionate virtual care takers of adorable kitties. Wondering what we are talking about? Well an all new game, dubbed MewSim, lets users do just that. Developed by Dynamic Pixels, it has now gone live on the App Store. With a tinge of humorous animation, the title claims to be a comic interactive simulator.

Players can do it all with this game from bringing it up to care taking and deciding if they want a mischievous or an obedient pet. Moreover, MewSim lets gamers choose their pet’s gender, color and name. Each one of them has unique attributes, skills and talents. The male or female cat too displays their own distinctive traits with peculiar animation, traits, behavior, and point of view.

The kitties have been designed with extremely eye-catching animation. It plays with all the objects in the house which just like every second of the pet’s life, is animated. This motion control enabled game comes in several languages like Italian, French, English, German, Russian, Polish and Spanish. Bringing along two absorbing mini-games, the title is said to be influenced by them. The awards received in the mini-games are clipped onto the fridge of the in-game kitchen.

In addition to the above, iPhone owners can participate in international online cat shows and exchange cats with their friends. The game is retailing on the iTunes store for free.