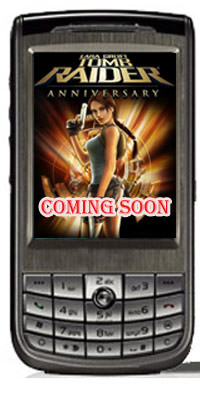 Rejoicing the 10 year anniversary of the Tomb Raider franchise, Lara Croft will star in a brand new adventure taking in familiar locations from her past. Encouraged from the initial three Tomb Raider mobile phone games, Lara Croft Tomb Raider: Anniversary devotes to conserve all the elements which made the innovative mobile game.

Lara Croft is the world’s greatest action heroine of all time. In the game, player can use all of Lara’s guile, latest fluid movements with Crystal Dynamic’s latest technology, athleticism and gadgets in her chase to conquer the undiscovered ancient work of art. The animated enemies include fierce animal and supernatural enemies, wolves, bears, crocodiles, horrific monsters and of course, the T Rex. With the innovative and improved AI means all enemies will exhibit a more diverse behavior set, providing improved combat challenges for the player.

Simon Protheroe, New Media and IT Director at Eidos remarked “We wanted to take the very best bits of the original trilogy and deliver a new and improved version, whilst still retaining that familiar blend of puzzles, exploration and action that the series is famous for,”. Adding to it, he explained “With completely revamped graphics, the Peruvian sections of the mobile game are now more akin to the latest console version of Anniversary, so mobile gamers are in for a treat.”

The dynamic and mysterious world allowing discovering lands and solving the deepest, darkest mysteries, open the doors to new realms, uncover great rewards, unearth secrets to Lara’s past and explore the place. This can only be possible with the help of multiple playthrough options, making the game more exciting for the player.

The Lara Croft Tomb Raider: Anniversary game will be released in December 2007 for mobile phones.