Home Apple Juggle Monsters stumbles out for the iPhone 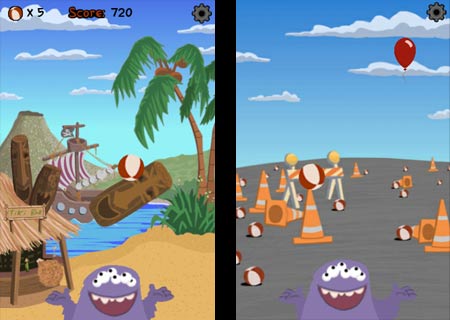 Users who always found jugglers exciting can now practice to be one. With this all-new game from Blabbelon namely the Juggle Monsters, iPhone owners can now pass time by ensuring that the Blab monster juggles a number of items successfully. This adorable multi-eyed purple monster has to avoid several obstacles that come in its way and simultaneously keep the objects in the air.

While pirate ships fire cannon balls and tikki bars are thrown their way, gamers are needed to concentrate on the task at hand. All this takes place on a beautiful beach with a simple gameplay to keep gaming enthusiasts immersed in this Blabbelon offering. As players interact with the numerous backgrounds, the game introduces more props for them to manage and juggle. This title is said to be the first ever game being released by Blabbelon for the iPhone platform.

“We’re very excited to bring Juggle Monsters, our first entry into the gaming market, to the iPhone app store,” stated Ed Ikeguchi, founder and CEO of Blabbelon. “Having started Blabbelon as a viable voice chat option aimed at the online gaming community, we think that the social nature of mobile games complements our existing offerings very well. We look forward to finding new and innovative ways to bring the not-so-distant worlds of online voice chat and gaming together – providing consumers a better overall gaming experience.”

The Juggle Monsters is the first game from the lineup that is yet to be released by the company. Blabbelon is currently working on two more titles with one being a pixel shooter and the other a 2D side-scrolling platform. It is said that the company’s signature characters like the Blab Monster and art style will also be prominent in its other forthcoming titles.

These iPhone titles will soon expand to the iPad and the desktop platform. The addictive Juggle Monsters can be downloaded from the Apple iTunes Store for free.