While rumor mongers are going agog over apparent details regarding iOS 8, users who’ve downloaded the iOS 7.1 update are reporting faster battery drains on their iPhone and iPad devices. Although this flaw is yet to be acknowledged by Apple, tons of people are reporting the problem on social media channels and forums right now.

iOS 7.1 was released this Monday for all devices which posses the previous iteration of operating system. This software was quick to land of people’s devices, and according to a report, it’s on 21 percent of all iPhones and iPads already. It’s a large portion among these 21 percent of iDevice users that is complaining that their battery seems to be draining much faster than usual. 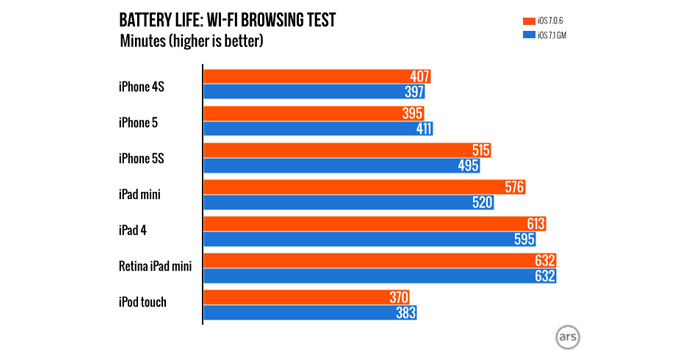 It isn’t to say that Apple was hasty with the iOS 7.1 update, since it had put it through extensive testing in the last few months, having even released five beta versions prior to the public launch. But what went wrong throughout all this that Apple didn’t notice the critical battery flaw cannot be deciphered.

In its review of the iOS 7.1 software, Ars Technica ran a battery test for a number of different iDevices, and the results clearly show that the battery life was lower with those running iOS 7.1 than iOS 7.0.6 in most cases. The infographics can be looked at in the image above.

Available for download right now, iOS 7.1 introduces a number of fresh features to the Apple platform. These include the integration of Apple CarPlay, the crucial reboot fix, new design changes and a lot more. Looks like the company now has to get back to work on the said OS to solve the newfound battery issue.