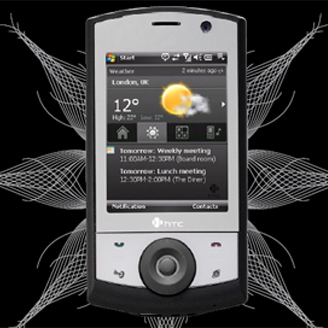 HTC Touch Cruise’s navigation is very user friendly with the new HTC’s TouchFLO technology, which enhances finger touch scrolling and browsing of Web pages, documents, messages and contact lists, controlled by simply sweeping a finger across the screen. TouchFLO also offers the ability to view photos and photo slideshows using on screen controls and to zoom and rotate images with only one hand.

HTC Touch Cruise is sleek and stylish in design. The HTC Home screen will provide one-touch access to emails, text messages, calendar appointments and contacts, also with current weather conditions and forecasts for cities around the world.

HTC users can easily swipe their finger on the display to launch an animated, three-dimensional interface comprising three screens- Contact, Media and Applications. The interface can be spun by swiping a finger right or left across the display.

HTC Touch Cruise offers super fast HSDPA/3.5G connectivity including the Wi-Fi and Bluetooth making it easy for the users traveling by making it a highly connected device.

HTC Touch has a 2.8’’ screen which is great for enjoying mobile multimedia and because it runs on Windows Mobile 6, the built-in Windows Media Player which is ideal for music and movies.

“The original HTC Touch has already been a phenomenal success, and the HTC Touch Cruise™ with fully integrated GPS adds another dimension to our leading touch screen device family. We firmly believe in the importance of choice – one device does not fit everyone’s needs – and we’re proud to have been able to launch three HTC Touch devices since June.” said Florian Seiche, VP of HTC Europe.

Features of the HTC Touch Cruise Phone at a glance:

The HTC Touch Cruise is announced in Western Europe and expected to come by November the cost is not yet known.