A lot of people use Facebook to share links, mainly stuff they’ve read on websites and to do so, switching between apps is mandatory on mobile. The SNS clearly knows this and they’re testing a new feature which involves integrating its own search engine to make locating and sharing content easy.

Some iOS users have started seeing a new ‘Add a link’ option along with the buttons to upload photos or locations. On clicking this, you’ll be able to enter keywords or a query and Facebook will generate matching links which you might want to share. Before posting the content for everyone to see, you will be able to preview what’s on the destination website. 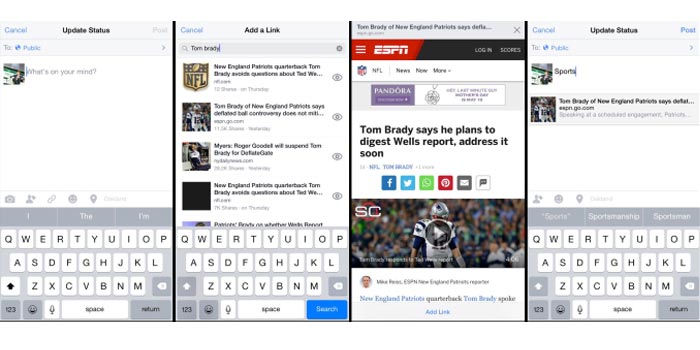 According to TechCrunch, Facebook’s new feature is an experiment which adds a new way for users to share links. Everything you see from the internal search engine is basically stuff that’s shared on the SNS itself. And since almost every website or publication uses Facebook to get their content out, you’ll have access to stuff that’s not being indexed by Google also.

In short, the SNS wants you to stay on its application for as long as possible without the need of using any other search engine apart from its own. The report notes that Facebook has indexed over 1 trillion posts to enable this capability. Recently published content with a lot of reposts by people is what shows at the top here. And we wouldn’t be surprised if Facebook started promoting certain websites through this feature.

For now, Facebook’s own in-app mobile search engine is limited to a small group of users on iOS in the US only. There’s a good chance that the SNS will bring the feature to more people in the near future.