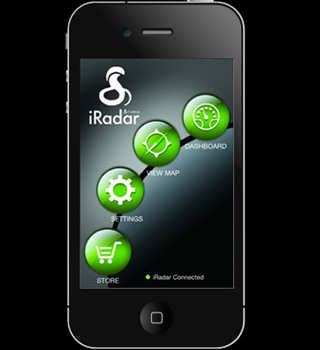 Ever wanted to prepare for those upcoming speed and red-light cameras while driving down the street? Well, iPhone users can now be forewarned on the same with Cobra iRadar that provides them with a smart detection system. Through this offering, users can control settings, view radar alerts and log alert history by utilizing the handset’s Bluetooth wireless technology connection.

The Cobra iRadar app is noted to be the control center for iRadar. Through this software, mobile phone owners can tweak preferences such as Alert, GPS and User settings while providing access to speed and red light camera location alerts. Up to the minute speed and red light camera alerts, intersection alerts and known speed traps are further displayed. The company claims that these locations are completely updated daily through Cobra’s exclusive AURA Camera and Driving Hazard Database.

The type of alert as well as the proximity can easily be seen on the handset’s large display screen. While driving, the app can even be operated in Map View and Dashboard mode which displays speed and direction as well as all local AURA locations on a Google Map respectively. Even radar alert history is tracked while displaying earlier alert locations on the Map View. The app can be combined with the Cobra iRadar Detection Unit to acquire these alerts.

Cobra iRadar app can be picked up from the App Store absolutely free of charge.