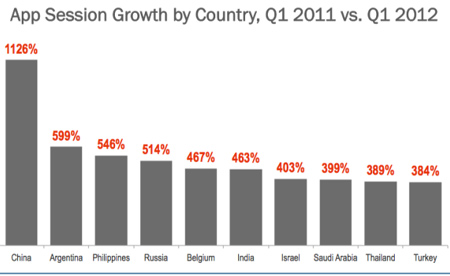 According to a study conducted by Flurry, only the U.S. is ahead of China in terms of application usage on smartphones and tablets over several mobile platforms. The report also suggests that the country which is in the second position, has been experiencing a noticeable growth in this sector throughout the past year.

During the first quarter of last year, China was at the 10th position in terms of application sessions. As opposed to that, the nation now stands behind only the U.S., making itself the second largest app economy. This growth is mainly being attributed to factors like a large population and a rapidly emerging middle class. 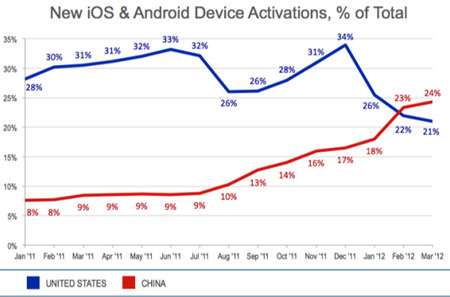 “With China now activating more devices per month than the U.S., this means that the gap is closing between the two countries in terms of installed base. Not only is China already the second largest app economy, but also could eventually overtake the U.S. as the country with the largest installed base of smart device users. We estimate that the U.S., a more mature market, currently has more than twice as many active devices than China. However, China, a faster growing, emerging market, already has twice as large an installed base as the next largest market, the UK,” says a new post on the official Flurry blog. 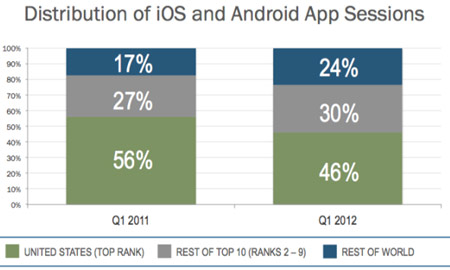 In addition to this, this Flurry survey has compared the activation of new iOS and Android based devices in the U.S. and China for the past year as well as the first quarter of 2012. While in January 2011, China saw only 8 percent activations, the U.S. noted the figure to be 28 percent. On the other hand, China contributed 24 percent to device activations in the world through March 2012. The U.S. was left behind at 21 percent.

If China continues smartphone application usage at the rate which this Flurry report suggests, it should soon bag the first position in the category soon enough.