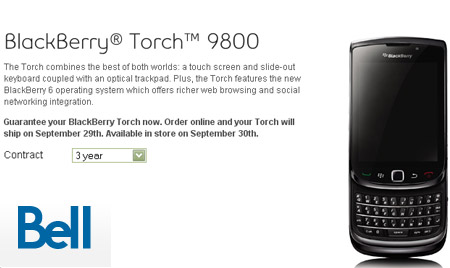 It has been a month since we have been anticipating the BlackBerry Torch 9800 to come through Bell. Finally it has, the handset is up on Bell for pre-order with a shipping date of September 29. The Torch will hit shelves in Canada by September 30.

Interestingly, just as Vodafone and Orange both are offering the device through their networks in the U.K, we hear that Canadian denizens too will have a choice of networks. There have been leaked images of the Torch branded by Rogers surfacing in the web world.

However, Rogers has also displayed the product on its official website, slated coincidentally for a September 30 release. While at the same time, Telus has begun their pre-order for this handset. The demand for this handset is reaching astonishing heights. We even hear that it is soon going to come through Virgin. That makes its count of networks to roughly six carriers.