Along with several new Chromebooks, Google also took the wraps off the Asus Chromebit which is the first of its kind in the Chrome ecosystem. Like the Chromecast, this device is a small stick that’s a bit larger than your average USB flash drive. But instead of just deliver streaming capabilities like in the former, it comes with a full OS baked in.

Of course, the Asus Chromebit will have the Chrome platform preloaded and it’ll deliver all of the features you’d find on laptops and desktops running the same OS. Windows and Android based mini PC of such have been around for a long time now, so it isn’t surprising that even Google wants a piece of this market. 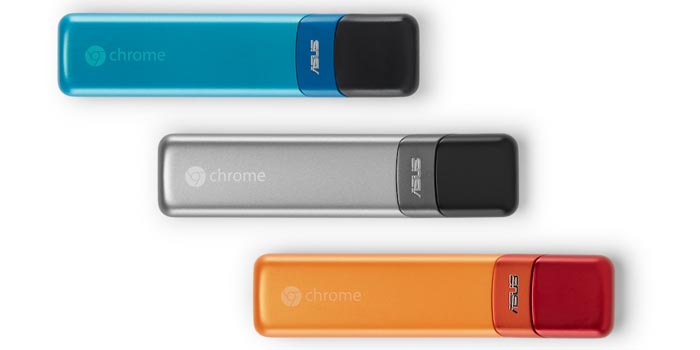 Sadly, neither Asus nor Google have a lot of information to share on the stick. As you’d expect, it connects to your TV screen or monitor via HDMI and the processing power will be delivered through a quad core Rockchip processor based on the fairly new Cortex A17 core. There’s no word about USB connectivity, but you will be able to attach a mouse and keyboard over Bluetooth.

Dual band Wi-Fi ac support is also onboard and that about all we know. Google notes that the Chromebit will be of much use in schools and businesses. In other news, the search giant revealed new Chromebook laptops from its existing partners with prices as low as $149. And it also disclosed that new OEMs such as True, Nexian and Xolo will be designing Chrome devices soon.

We’re sure that more details on the Asus Chromebit will surface in the near future. As for a price, the HDMI dongle will retail for under $100, while its release date is slated for this summer in the US.