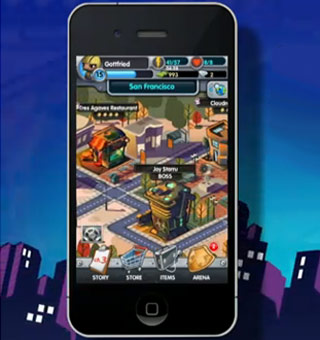 After the location-based MyTown app and Facebook game Nightclub City, Booyah plans to come back with a bang on iPhone and iPod touch. The company will soon launch Nightclub City DJ Rivals, a rhythm-based, role-playing game for mobile devices.

Combining real-world geo-location check-ins and beat battles, the game will have players tapping, fading and scratching music tracks as they attempt to beat rivals. Gamers step into the shoes of an indie DJ fighting against Big Hits Records and BlandCorp who are attempting to take over the city and render music boring and safe.

There are items to unlock, in-game cash and abilities with which to enhance the DJ avatars. A multiplayer mode that employs location-based GPS functionality and the chance to face off against the drones of Big Hits in a variety of ‘boss’ battles are some of the interesting elements coloring up this title.

Booyah hasn’t yet announced a launch date for the game in iTunes.