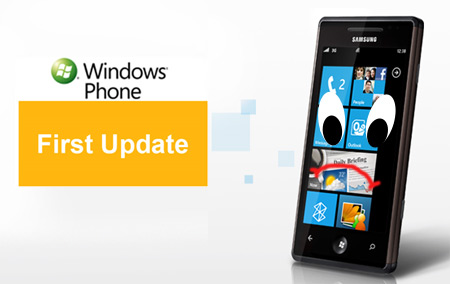 It’s not a good time to be a Samsung Windows Phone owner. But it’ll probably be all sunny side up for most in some time since Microsoft seems to be working hard on the software update issues affecting a small percentage of those using a Windows Phone 7 handset. Meanwhile, the technical snag troubling the update process for Samsung phones has forced Microsoft to temporarily suspend updates for the these smartphones.

According to the Windows Phone blog, 90% of those who received an update notification installed the software patch on their phones successfully. The updating process appears to have gone badly for just 10% of people who were entitled to the upgrade. Out of these failed numbers, 50% are speculated to have hit the wall due to inadequate PC storage space or a bad internet connection.

The number crunching means that the remaining 5% of users who didn’t manage to install the patch fruitfully were probably Samsung handset owners. Ironically, this update was meant to smooth out future upgrade processes for more exciting things like copy/paste functionally and enhanced Marketplace search.

Although Samsung phone users may not be in a position to have anything along the lines of magnanimous feelings for Microsoft at this point, it is their very first update after all. And we all know it’s mostly always the not-so-nice gossip that gets viral on the web when it concerns big names.