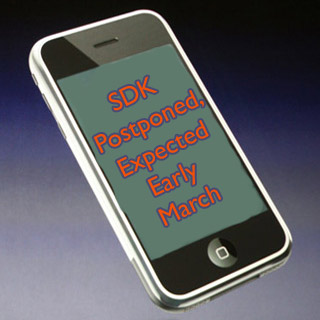 Initially Apple had announced that they would release the iPhone Software Development Kit (SDK) by February 2008. It was said that this SDK will enables developers to make their own applications for the iPhone and iPod Touch and even protect the iPhone from viruses, malware and privacy attacks, amongst others.

The February launch didn’t come true, thus a new rumour rolls out saying that the SDK is slated to be introduced by 6th March. In this software developmental kit, Apple will also add iPhone’s forthcoming update, 1.1.4.

Additionally, few exciting new enterprise features, which would enable the iPhone to work more closely with corporate e-mail software, are also slated to be launched. This open platform will keep most of the developers waiting, postponing their plans to develop their own applications.

When Apple’s CEO Steve Jobs announced the SDK launch period, he mentioned “We’re trying to do two diametrically opposed things at once—provide an advanced and open platform to developers while at the same time protect iPhone users from viruses, malware, privacy attacks, etc.”

As we all know, the iPhone is prone to these malicious programs due to the high-end function. However, the SDK will help to safeguard the device.