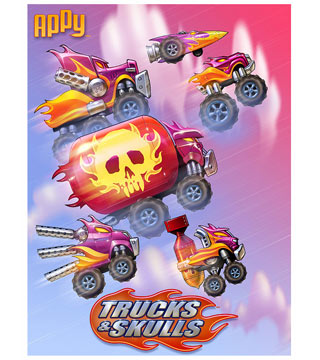 All the rampages and explosions are back to haunt the skulls with Zombie, Goth, Hot Rod, Bling and Dragon. Trucks & Skulls Nitro, the physics-based puzzler by Appy update is out for iOS devices. The game is added with 15 new levels, truck mods and an in-app store packed with goodies.

The updated brings in a new Iceopolis world, Gold challenges, aiming aids, a Quick start button and social player awards. Depending on the performance in each level gamers are awarded with gold, which they can collect or use to buy in-game items.

“Trucks & Skulls Nitro is a stupid fun game made better by insane truck mods that will turn the basic gameplay on its head,” mentioned Chris Ulm, CEO, Appy Entertainment. “We also implemented the feedback received from our player community to make all sorts of enhancements. If you never played Trucks & Skulls, this is the perfect opportunity to try it out. If you have, we look forward to hearing what you think of the truck mods!”

Trucks & Skulls Nitro is a free update and is available on iTunes for all iOS devices.